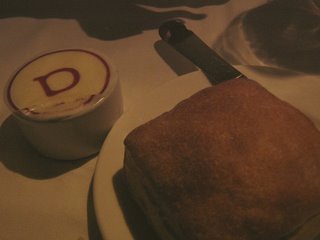 Having been to Emeril's, and Emeril's Delmonico in New Orleans, and both of them being far superior to the classic institutions like Commander's Palace and Galatoire's, I knew we were in for a treat when we arrived at Emeril's Delminico in Las Vegas, inside the Venetian Hotel and Casino. The Delmonico's in New Orleans was really the highlight of that trip. The building was very old and charming, with beautiful brown/taupe fabric on the lower half of the walls, with crown molding everywhere. Very cozy, yet modern. And the food, of course was spetacular. In contrast, the Vegas outpost was surprisingly plain in design, with absolutely nothing adorning the walls, only the dim lighting. Absolutely packed (on a Monday night), and quite loud. Aside from the decor (or lack thereof), the only other missing ingredient were the black napkins. At both restaurants in NO, I was offered a black napkin to place on my black dress, which avoided leaving lots of unsightly white lint my dress. The food, luckily, was just as wonderful.

Our wait captain /host was a very charming, handsome young man named Robert. He guided us through the menu and wine list, and regularly checked in throughout the night, making sure everything was taken care of. We were also served by a waiter, and three runners. Just like Emeril's in NO (and all the restaurants we visited down there), the service was very attentive and accommodating.

The wine list was a notebook about one inch thick. I was very hard pressed to find a wine under $80. Scanning the pages, a good 80% of the wines were priced over $100, with many, many priced in the $200's, $300's and up. We found a nice Spanish Ribera del Duero for $40. It was the first properly chilled red wine I have had in a long time.

The kitchen sent out an amuse bouche of chicken on a fried wonton skin. Don't ask me what else was on it, it was too loud to hear the server and too dark too see it. But it was quite good, and a great little teaser. 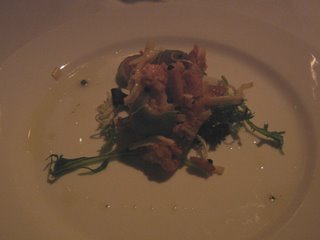 The highlight of our meal was our shared appetizer, truffle potato chips. Very thinly sliced chips, doused with truffle oil, topped with Parmesan cheese. The best I have ever had, and probably the first time I have had a kitchen be more than generous with the truffle oil. The fumes rising up from the plate were heavenly. 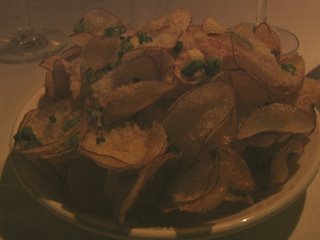 I could have ordered another round just for myself, but I opted for the foie gras instead. The seared foie gras sat on a blue cheese turnover. Luscious meat-flavored butter (as I affectionately call foie gras), with blue cheese and puff pastry. Decadence, on top of decadence. 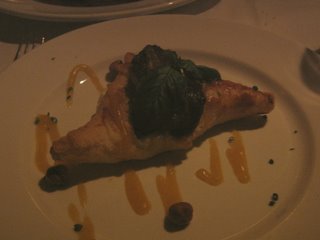 For my main I ordered another appetizer (although easily large enough to be a main course) of Oysters Bienville (actually a variation of the classic dish). Breaded and friend oysters with mushrooms, bacon, spinach parpardelle, and Herbsiant. The Herbsaint added just the slightest anise flavor, that complemented the oysters more than it drew attention to itself.

The only disappointment was the dessert. We ordered a bananas Foster ice cream pie, and it was just a bug hunk of banana ice cream. I should have just stuck to the complimentary birthday sorbet. But the Irish Coffees made up for it. 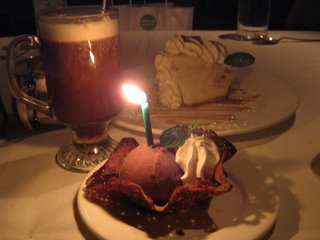 Posted by triplecreme at 9:53 PM

I love you idea here.
I found your blog while looking for Ford's (Culver City) telephone number to place a take out order. Believe it or not they don't have one. Not even on their take otu menu. Anyway. As I was saying, great idea. I've always wanted to do the exact same as you but from a "normal" guy. I love restaurants and we don't have enoug good ones around Culver City. Our favorite (my wife's and I) was Couture on Lincoln, (North of Washington). They were the best I've had in LA, no questions.
Caramel (made that day) Profiterolle. Mmmm... Of course, they closed without leaving a number or anything. What a pain.

You should try 3rd Stop on 3rd just west of La Cienega. Not quite a restaurant but a bar owned by 2 guys who've managed all the big hot shots restaurants in LA. They have something like 30 tap beers.. (Try the Rasberry one Mmmm) and the food is sooooo good... Cheep and good. You can't beat that. Try the Chocolate Pizza for desert.. Anyway.. I'm babling on here.

Keep up the good work... Maybe do a little best of in Culver City for us Culverians... ;-)

Thanks, Paul. Culver City is getting some good restaurants, finally. I didn't get a chance to check out Couture before they closed, but it was owned by the previous owner of 12 Washington. You should try 12 Washiington, if you haven't already. Thanks for the 3rd stop reccomendation, I have been meaning to get down there.