All the Syrah You Can Stand 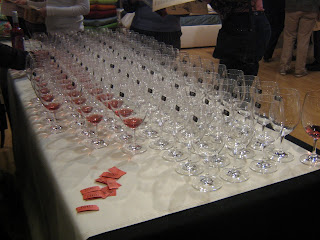 I attended a Syrah tasting at held inside HD Buttercup in the Helms Bakery complex in downtown Culver City (and Father's Office still looked far from completion). It was organized by Learn About Wine. Once they opened the doors, were handed a wine glass started off with some rose, and then began strolling through the massive store, stopping at the tables to taste the wines and chat with the distributors/wine makers/sales reps. There was also some food available to snack on, courtesy of The Cheese Store and Heirloom Catering. 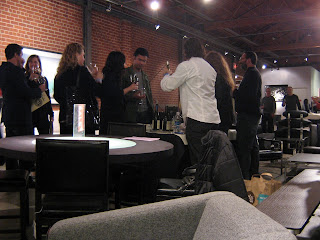 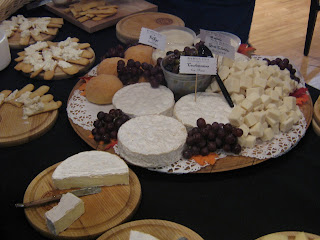 There were about 40 different Syrahs available to taste, which is really quite overwhelming. I have to say, I was Syrah-ed out by the end of the evening. We rounded off the night with some pizza at Ford's Filling Station followed by a one hour wait for our taxi. Apparently, there is only one taxi company allowed to pick up in Culver City, and they take their sweet time doing so. This needs to change, especially with the thriving restaurant scene. One should be able to walk out of Fraiche, Ford's or Bottle Rock to find a couple of cabs waiting and ready for a fare. By the time our cab showed up we were sober. 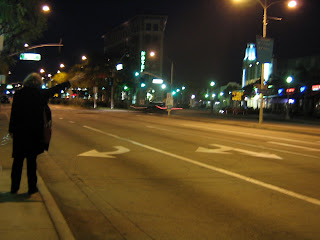 Posted by triplecreme at 8:26 PM 4 comments: 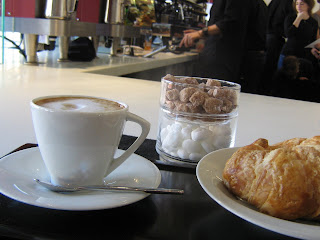 Walk into Silver Lake's new LA Mill cafe and you know you are in for something different. Where do I start: the somewhat- bizarre-uber-cool-Kelly Wearstler-Regency-style-borderline ugly-yet hip decor, the formal format, the over-extracted espresso and unremarkable pastries, or the high prices... We just wanted some coffee and a pastry, and a table to enjoy it on. It is not like your usual coffee house format where you order at the counter then take your coffee to an available table. We were seated by the host, ordered our coffee through the server, and were presented it on little wooden trays, with little cut-outs for the saucer to fit. There is something very uncomfortable about this place. I felt like I was in an ultra chic and overpriced hotel restaurant. Absolutely not comfortable for lingering over the newspaper and coffee. They are clearly reaching for new heights, sort of the French Laundry of coffee. Just as I was getting used to restaurant menus listing the farm from which their dendelion greens came from, now we have a coffee store listing thier milk source (Strauss Organic). Anyone heard of textured milk? Well, now I have! Here is a sample from their menu: "Vanilla Latte - Espresso poured directly over house made vanilla bean-infused syrup, mixed with textured milk and topped with foam 4/5" and, "Espresso/ in porcelain cup - coffee brewed under approximately 9ATM of pressure, created strong and rich 1.5-2oz. beverage topped with traditional foam known as crema 2.5" What is an ATM? Be sure you hit one up before you come here! Over-wrought, pretentious, uncomfortable, overstaffed, highly stylized. I don't like trashing establishments on my bIog, so let me clarify that these critisims are based on the fact that they are trying to do something different, and I just do not want something different. I can appreciate that they make their own vanilla syrup and chocolate sauce, and take coffee seriously (they even have a couple Clover machines). I was just expecting a more comfortable, relaxed environment for early morning coffee. They offer lunch (with a menu by Michael Cimarusti, who was in the kitchen that morning) which looks promising. But for your regular AM coffee, I think I will stick to nearby Intelligentsia. 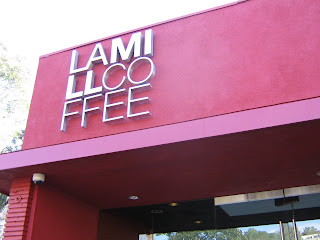 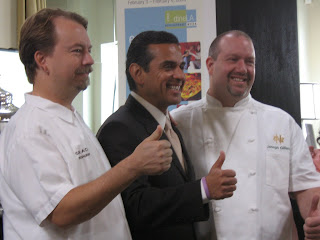 I attended a press conference this morning for the launch of Los Angeles' first Dine LA Restaurant Week. From January 27- February 1 and February 3-8, over 140 participating restaurants will be offering special prix fixe lunches and dinners ranging from $15-$34. The idea is to promote and showcase Los Angeles area restaurants by attracting new customers and thanking existing ones with their specially priced meals during a typically slow time of the year for the restaurant industry. This will be a huge promotional event for Los Angeles restaurants, much like it has been for cities like New York and San Francisco.

The press conference was held at Neal Fraser's Grace restaurant on Beverly Boulevard. After checking in, we helped ourselves to complimentary pastries and coffee, mingled with a fellow food blogger, and took a seat behind the television crews facing the stage. 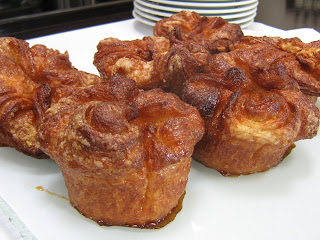 The highlight was the presence of Mayor Antonio Villaraigosa. All eyes were on him when he made his grand entrance followed by his bodyguards and handlers. He posed for some photos with the chefs including Mary Sue Miliken and Susan Feniger of Border Grill. It was great to see a politician in action. He was gregarious and affable, working the room, and gamely wore the chef's coat presented to him by Miliken and Feniger. The mayor spoke, along with The Border Girls, Neal Fraser and Mark Liberman, head of LA Inc. about how excited they are about LA's first restaurant week, what a great diverse food community we have, how LA is the greatest city.. blah, blah, blah. After the conference, our mayor (during which he took a moment to address the Spanish language TV crews in Spanish), played the role of rookie restaurant employee in his new chef's whites starting from the bottom up: he cleaned up a broken champagne glass, then began handing out hors d'oeuvres. Photo-ops galore! 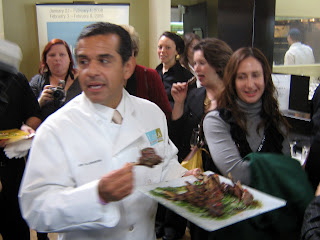 We nibbled on lamb chops (served to me by Mayor V himself) and tuna tartare, while sipping on Veuve Clicqout champagne. I love these promotional events. They offer participants a lovely combination of insider news and free stuff. Today’s swag: a half pound box of See's Candy.
Posted by triplecreme at 1:55 PM 3 comments: 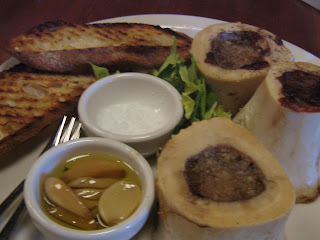 My friend and I were lucky enough to snag two seats at the bar last Saturday after only a 10 minute wait. Immediately, my eye went to this on the menu "marrow al forno." Aahh...roasted bone marrow, served with toasted bread, roasted garlic and flaky salt. I took my little fork and broke through the thin crisp top of the marrow and scooped out some of the fatty, gelatinous interior, much like a creme brulee. A little smeer on the toast, a piece of garlic, a pinch of salt...I was the envy of the room. My marrow-hater friend wanted some of my toast. "No", I told her, "you can only have it with bone marrow spread on top." Good thing the kitchen is more accommodating then me.
Posted by triplecreme at 2:06 PM No comments:

What I Go Through

Here is a shot of me rounding the final corner in the 1st Annual Miracle Mile 5K at The Grove. This is my 3rd 5K in 3 months, and I beat my last time by one minute! The life of a food blogger, unfortunately, isn't just fried avocadoes and cupcakes. But it does include a post-race-cholesterol-bomb-breakfast at Du-Par's!

Deep Fried Fat Should Taste Better Than This 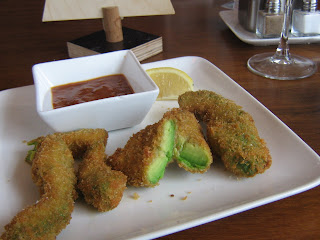 Avocado fries at 3 Square. Breaded, deep-fried slices of avocado had me so intrigued and excited. There is nothing I like better than fat with fat. The problem is, fat needs a fair amount of salt, especially avocados. They really do not taste like anything when they are unsalted. To achieve the proper seasoning, you must sprinkle the salt directly on the avocado as you eat it. Salting the crisp exterior just isn't enough. I was a bit disappointed, they certainly did not meet my high expectations. All the better - I don't think I need another fatty dish to crave. I will just stick with my current craving repitiore...The Office Burger, pork belly, fried sweetbreads, seared foie gras, triplecreme cheese, roasted bone marrow, onion rings, pizza....
Posted by triplecreme at 6:04 PM 4 comments: