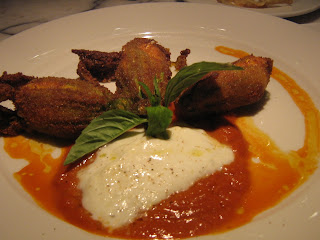 Before enduring a total mob scene at Dutton's Books in Brentwood the other night to pick up the latest (and last) Harry Potter book, we slipped into the bar at Vincenti and shared this wonderful plate of fried zuccini flowers. Stuffed with Burrata cheese, fried to an absolutely beautiful dark brown, served with more Burrata and some nice, velvetly smooth all-purpose tomato sauce. A great accompaniment to my glass of pale pink Robert Sinsky Rose.
Posted by triplecreme at 6:15 PM 1 comment: 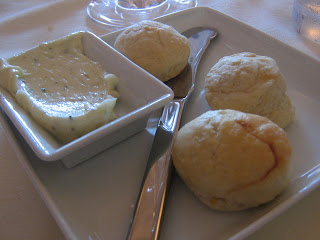 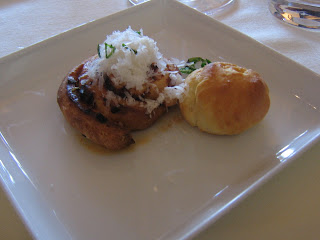 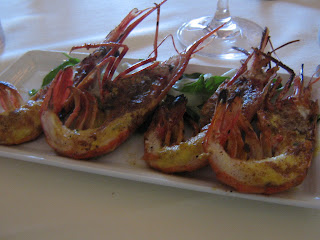 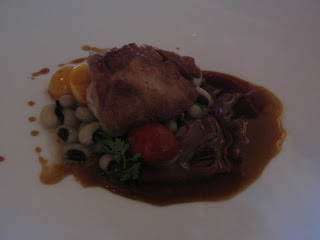 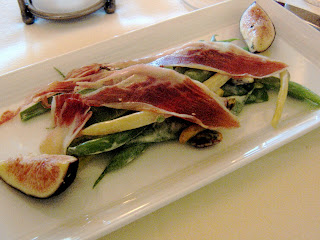 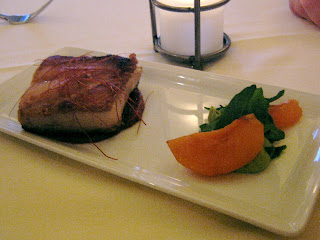 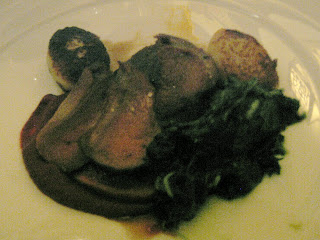 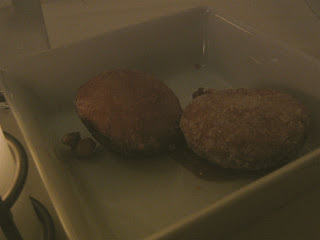 Posted by triplecreme at 6:05 PM 4 comments:

Bel-Air Bay Club - How the Other 2% Live 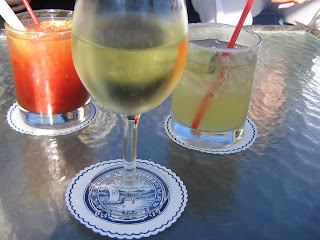 I was invited to the newly rebuilt beach club, the Bel-Air Bay Club on the beach in between Temescal Canyon and Sunset Blvd. It was an absolutly beautiful summer day. We sat outside, ordered from the bar menu, and met their new French chef, Yves. Overall, the food was pleasant enough, but certainly not exceptional. I liked the sliders, even though the burgers were cooked on the wrong side of medium for me, but the fries were crisp and excellent. The lamb chops with truffled potatoes were good, but a little to hot and rich for summer, and the quivering mint Jell-o was downright gross. 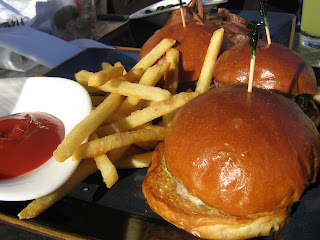 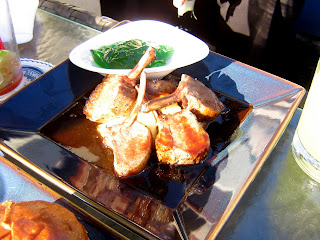 The artichoke was nice with the tartar sauce, but it was served in a pool of tomato sauce that made for un unpleasant combination. The only dish I couldn't eat was the lobster and crab dip - it was milky and runny, with a strong, canned fish taste. 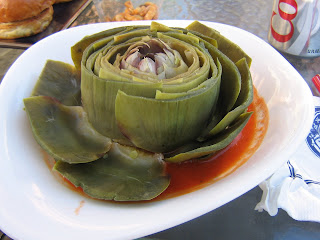 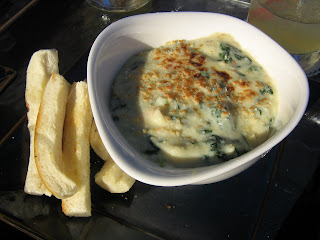 The other seafood dishes were probably the best. We had a shrimp cocktail, a nice seared ahi with mango, and a plate of sashimi with avocado and grapefruit that was wonderfully refreshing. 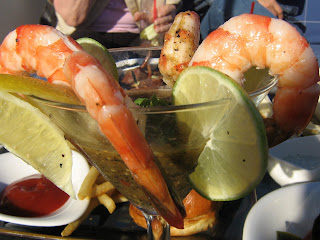 The food was edible but unmemorable. Like many mediocre restaurants with a view (Galdstone's), the location can make up for a lot (and food can sometimes taste better when someone else is paying for it).
Posted by triplecreme at 8:02 AM 1 comment: 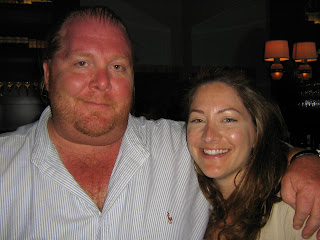 My friends and I had a fabulous dinner at The Foundry on Melrose (review to come soon), and followed it up with a visit to the brand new Osteria Mozza. We had a couple drinks of Sicilian Amaro called Averna, at the marble bar, soaked up the atmosphere, said "hi" to general manager David Rosoff, and made the earlist reservation posssibe: a weeknight in mid-August at 9:30. And, I got a photo with Mario himself! We checked out the menu, and there was a conspicuous lack of offal, in contrast to the new B&B in Las Vegas (with dishes like pasta with lamb's brain). We said so to Mario's partner Joseph, (son of Italian chef and author extrodanaire, Lidia Bastianach) and he said : "eventually". As cool as it was to see these New York legends, they did seem a bit bored while hanging out with the LA scene (maybe it was just the jetlag). Well, I worked up courage to ask Mario for a photo and he was game, (and he was quite snuggly, like a big teddy bear, and yes, he was wearing his orange clogs) and he seemed to perk up a bit. Welcome to LA, guys. 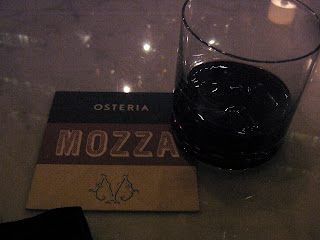 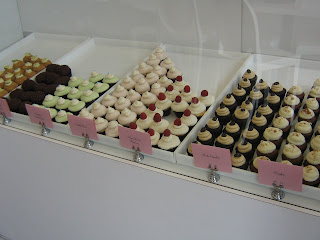 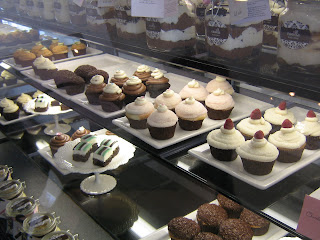 I checked out the brand new Vanilla Bake Shop in Santa Monica on Wilshire and 5th (a stone's throw from the new Yummy Cupcakes) this morning. It is a very clean, cute shop with a pretty brown, pink and white color scheme, and lots of friendly and nervous employees ready to help you. I bought one dozen mini cupcakes (reminiscent of Leda's) for $21.65. They are 3 for $5. (I was charged tax for this take out order, which it seems everyone does nowadays - anyone know if the law has changed?) They have a special insert to hold the cupcakes like Danties, but take a look at the photo and you will see how well it works during transport. 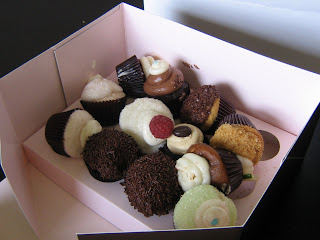 Their menu lists several cakes one may order, but I did not see any on display today. They also have several icebox desserts such as Tiramisu and "dirt cake," arranged similarly to a trifle in a mason jar. It looks cute in the jar, but I cannot imagine what it must look like when you dish it up on a plate (or maybe, it never make it to a plate, like my pints of Ben and Jerry's...). The cupcakes are beautiful, and excellent. Light, fluffy frosting, soft, moist cake, each cupcake with a distinct look, and cute packaging - all you could ask for in a bakeshop. I thought the end of cupcakes was near - apparently not yet. 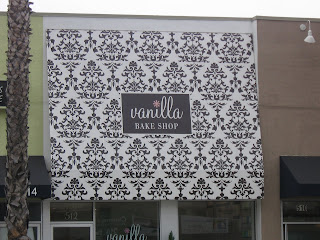 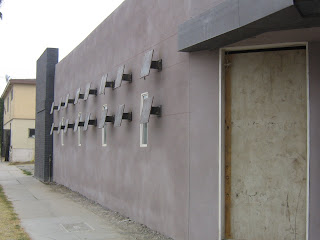 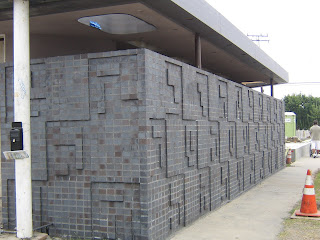 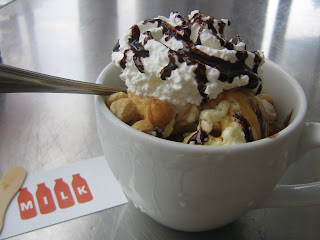 After a busy 4th of July, I was craving a nap this afternoon, but opted for a temporary sugar high instead. Milk is a wonderful ice cream/pastry/sandwich shop on Beverly Blvd. Sundaes, brownies, blondies, cookies, pudding, pecan bars, ice cream sandwiches, tres leches cake, chocolate cake, bon bons, and even a blue velvet cake (stunning color, but certainly not appealing as red). I choose thier version of Affogato, called Espresso a la Mode: vanilla ice cream with espresso, hazelnuts, whipped cream and chocolate sauce. It was so big and rich I was only able to eat about half of it, but enjoyed every bite.