...are much better than they may sound. I had them the other night in Las Vegas at Mario Batali's new (and better than Osteria Mozza) B&B Ristorante, in The Venetian Hotel. They were minced or pureed in placed inside tender fresh pasta, covered in a wonderful butter and sage sauce (sorry no photo - it was too dark, and I was on vacation). They were very mild, and had the texture of ricotta cheese (which may have been mixed in the filling). Everything about B&B was wonderful: smooth service, wine by the quartino, dark, cozy interior, and cool rock and roll on the soundtrack. Followed by fried sweetbreads, truly a meal to remember. 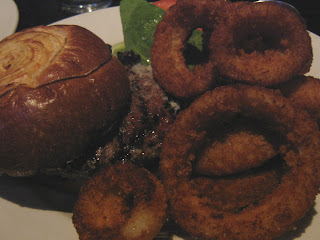 The old La Marina space on Culver Blvd in Playa del Rey has been changed over to a new restaurant/bar called The Del. Apparently The Del is owned by the same man who owns The Brig, Beechwood, and the soon to open Alibi Room. There is no sign out front, and the back dining room is still unfinished, but you can dine in the bar area from the regular menu and special bar menu. They also have a nice, full-sized pool table (with real pockets) in the room adjacent to the bar, and a private lounge area near the entrance. It was just us, and maybe three other tables of diners throughout the night, and some late-middle-age patrons at the bar, still thinking they are in the La Marina. I have a feeling once word gets out, the clientele will get younger and hipper. We ordered appetizers off the bar menu, which were all perfectly acceptable, actually outstanding for bar food, but just satisfactory for a nice restaurant. We started off with what they call "licked by the flames tarte flambe, bacon, oven dried cherry tomatoes, onions, mushrooms fromage blanc" ($10). 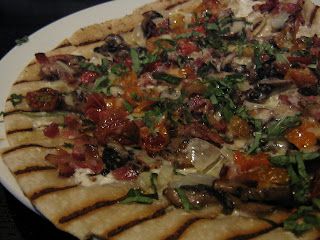 It is really a thin, grilled pizza. I have made grilled pizza before, but never this thin, and I prefer it over my naan style grilled pizza. The combo of bacon and onions were tasty, but it was oversalted. Then we shared the Ipswich fried clams with tartar sauce. These were good, but undersalted. 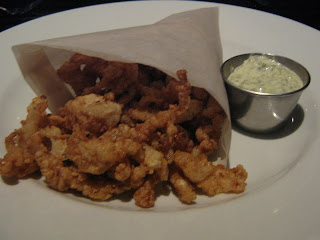 We moved on to the steak tartar (which, ironically, took the longest to prepare), which is listed on the menu as "traditional steak tartare, aioli, and potato chips." We read it to mean it can with a serving of aioli on the side for the chips, but it was, instead, mixed in with the steak. The chips were just a little too thick, and tasted as if they had been sitting around for a while, but the steak tartare was quite good. 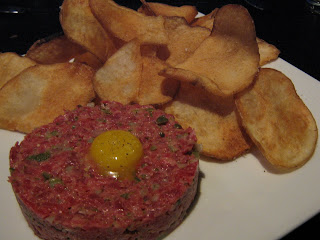 I moved on to their hamburger. Called "the cow and the del burger, avocado, tomato, pickles, onions and fries" ($12). I was actually relieved to see it did not come with bacon and blue cheese. I had it served with nice, crispy, dark onion rings. The burger was pretty good, with a nice tasty char on the patty and the bun. They have a full bar, with beers like Peroni and Pabst Blue Ribbon on tap, along with some wine, but no wine list yet. They gave us two deserts on the house. 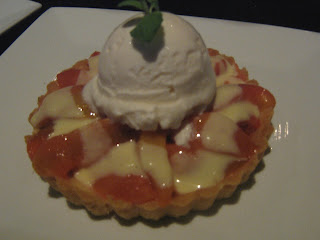 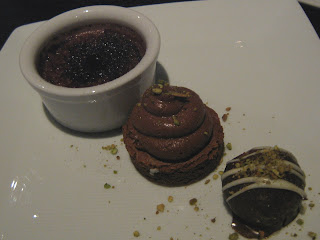 Very reasonably priced (bar menu $4-15, appetizers $6-10, main $15-26), menu of comtemporary American cuisine, with entrees such as halibut with chanterelle mushrooms, fava beans and corn puree for $22, and 30 day dry rib-eye steak with potato puree, asparagus, pearl onions and cabernet reduction for $26. The Del should be a nice, fun, bar scene, not unlike its cousin, Beechwood. It certainly is much needed in the bleak Playa del Rey/Meadowlands (oops, I mean Playa Vista) dining/nightlife scene.

Word on the Street 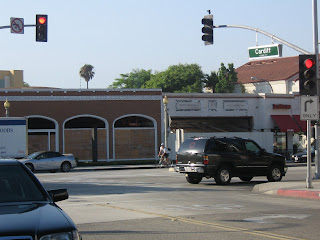 Word on the street is that the old Westwood One building in downtown Culver City (the brick one on the left) is becoming a Korean BBQ, and the old Prado Signs building right next door has been leased by a restaurateur from Chicago. Meanwhile, right across the street, on the corner of Cardiff and Culver, it looks like Ugo's gelataria is not too far from completion. Word is he brought in a young barista from Italy to pour proper shots of espresso, in the style of the bars in Italy. 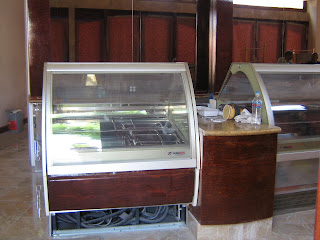 Posted by triplecreme at 3:04 PM 4 comments: 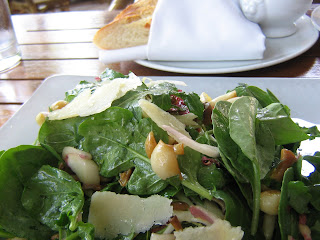 Fraiche in Culver City recently opened for lunch, and my generous friend took me there the other day. A perfect summer day, we sat outside in their covered patio. My friend and I shared three plates: mushroom salad, pea and mint ravioli, and a hamburger. The salad was nice, but the dressing a tad too sweet. The ravioli were heavenly: ricotta, pea and mint puree nestled inside a soft, delicate, pasta, lightly coved in a rich butter sauce, which I was later cleaning up with my bread. 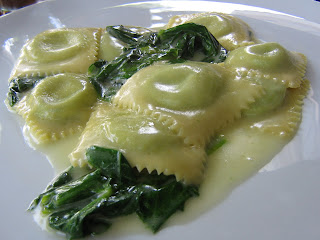 The burger is not a normal burger. They call it "Royal with Cheese" (go see Pulp Fiction if you haven't already). The "bun" is made from pate a choux dough topped in cheese (the same dough used in eclairs and cream puffs). I loved the crispy cheese layer. The meat itself was super moist and cooked perfectly medium rare. My friend was less impressed with the Royale. Mind you, this is the friend who took me for one of the best burgers in town at San Francisco Saloon. You may be disapointed if you are expecting a proper burger, but impressed if you are expecting something unusual. 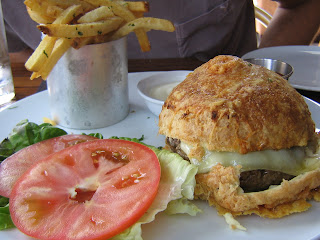 For dessert, we shared a slightly boring chocolate pot de creme (the chocolate flavor was too weak), and an outstanding Affogato. 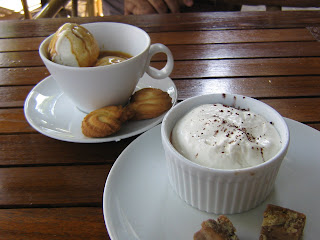