My Little Cupcake in Studio City 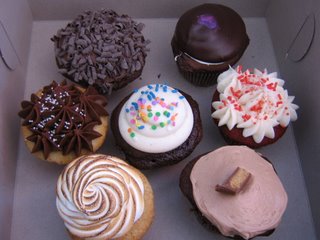 Yes, another cupcake bakery. Of course I couldn't resist. My Little Cupcake's cupcakes are far more ambitious then others I have tried lateley. They have the usual chocolate, vanilla, red velvet (all with artfully piped frosting), plus some interesting tricked out ones, such as the High Hat. 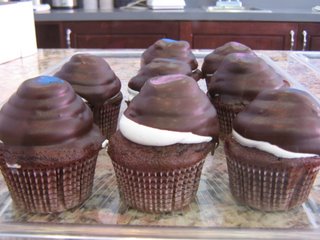 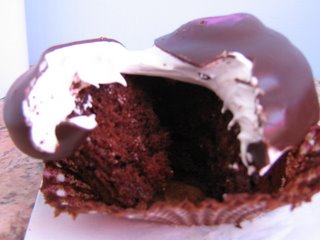 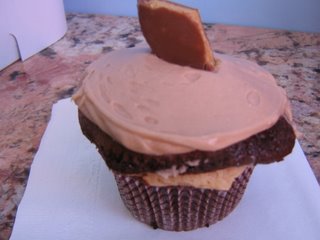 These are for the hard-core sweet tooth. After one bite of each, my stomach begged me to stop, a sugar headache kicked in and I crashed before I even got the sugar rush. 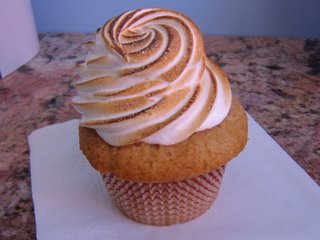 I did enjoy the lemon merengue cupcake. A dense, lemon cake with a dollop of lemon curd underneath a beehive of merengue, toasted by the plummer's torch. Much better than the pie, and not too sweet. Overall, I was dissapointed in the cakes. I prefer a nice soft, fluffy cake, and these were very dense, and just the tinest bit dry. The red velvet's cream cheese frosting was lovely, as was the vanilla, but the chocolate was unremarkable. 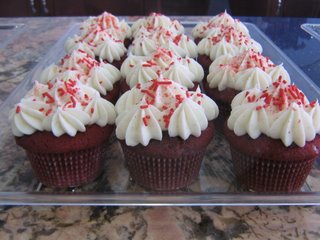 I think the joy of a cupcake is it's simplicity, a sweet little cake, just enough to satisfy. My Little Cupcake's are certainly beautiful, but just a little over the top. Maybe with all the cupcake competion around, they may feel the need to stand out and do something different. I think they are trying too hard; a cupcake should not be so complicated. Maybe I have had too many cupcakes lately, if possible. 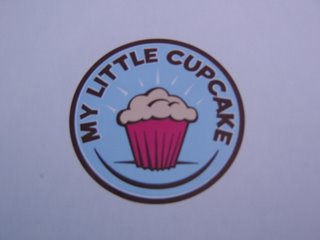 You're right--they are really pretty, but way too dense and rich.

They are nearly as sweet as Yummy Cupcakes in Burbank, which is too sweet for most adult palates. The High Hat cake was overbaked, dry as dust the day we tried it, but the regular Chocolate was moist and the best of the bunch.

Worth trying if you're in the area. Had the lemon meringue, which today was topped with marshmallow creme instead of meringue...way too sweet for me, and that's saying a lot!

I got the High Hat from a local coffee shop that just started carrying them. Incredible! They must've been fresh - it was moist and tasty.

I had the red velvet and the concord grape cupcakes. They were fantastic (especially the frostings)! They are a bit on the drier side, but that is preferable to places that make oily/greasy cupcakes. The best cupcake I've ever had was from a shop in London and so far, My Little Cupcake comes closest in CA.

I just returned from Studio City, where I visited My Little Cupcake. THEY WERE AMAZING!!! They were not too sweet or dense, they were JUST RIGHT. I am going to pester the owners to start shipping overnight, so I and all my friends can enjoy in Las Vegas.

The cupcakes are better than most than I have tried around town. I did find that the chocolate cupcakes were spongier than the super dense vanilla cupcakes.

I would love to try their carrot cake cupcake, but it has orange frosting instead of cream cheese, which doesn't sound right to me!

Personally. I really enjoyed that the cake was dense. I will be going back!

Yeah, the Red Velvet ones are great but super-rich...the coffee ones are just...OMG too much. LOL nice design though.

TERRIBLE! I bougth them yesterday for my boyfriend's birthday. Thought I'd spend a little extra and get some unique cupcakes. They were so dry they tasted old. It was so disappointing that I won't go back for a second try or recommend to anyone. Bummer...I'd think professionals would know how to not "over" bake a cupcake.

You should join our LA cupcakes meetup group http://dessert.meetup.com/5/

Try Sprinkles cupcakes or suzie cakes there to die for!

As interesting as their creations were, their cupcakes seemed rather dry along with the person at the counter. I liked the marshmallow cupcake but over all I feel Yummy Cupcakes in Burbank tasted more fresh and recommend that over this place.

Have you all heard about a new place they're opening in Santa Monica named xooro?