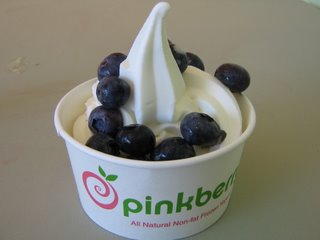 Finally made it out to Pinkberry in West Hollywoodtoday, to see what the big deal is. After reading the article in the LA Times about Pinkberry and their disgruntled neighbors, I thought it would be a mob scene with no place to park, but instead I found a spot directly across the street! I couldn't believe it! I wanted to leave my car there all day and bask in the glory of having the prime spot. There were about 8 people ahead of me, and they did make us form the line outside, rather than snake in the air-conditioned, too-loud-bad-Euro-techno-pop-blaring store. It moved pretty quickly. They offer 2 kinds of frozen yogurt: plain and green tea. I tried a sample of the green tea and ordered a small (5oz.) plain yogurt with blueberries. 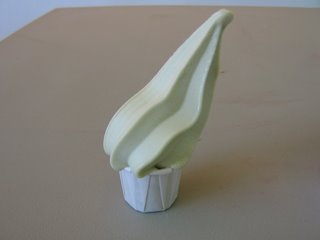 This was the first frozen yogurt I have had that actually tasted like yogurt. It was ice cold, and stayed cold. No melting here. I do not like green tea, but the yogurt had just a nice delicate taste of green tea, which complemented the yogurt's tangyness nicely. After I sat down the line quickly grew out the door and down the street. I was surprised how much I enjoyed it, but I do not know how soon I will be wiling to make the trip out to WeHo just for yogurt. Maybe the next time I am at Lucques I will swing by... 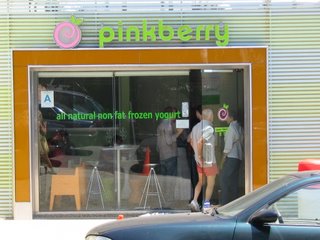 I was at the kiwiberri @ 3rd and la cienega,and at about closing time on Saturday Night I saw the Pinkberry owner along with 2 goons enter kiwiberri smoking a cigar,like some korean mafia goons and told the kiwiberri owners to step outside in a very threatening manner then I and about 10 friends witnessed him threatening the owners of kiwiberri with physical harm, The Pinkberry owner said " You dont know who your messing with, we know where you live so watch your back" We, along with the owners of kiwiberri by the surprised/confused look on there faces, were all very shocked to witness this to say the least, I had absolutley no idea the frozen yogurt was such a dangerous business, they werent kidding when I heard there was a fued between the two companies , but man am I glad I sell morgages for a living instead... WOW!!!!

To Anonymous,
You're a moron.

The Pinkberry owner is a female.

sounds like anonymous 1 is either a dane cook wan-a-b or a 15 year old with a palate for trendy food and a penchant for danger.

I'm sure you've now seen the explosion of Pinkberry locations all over the place, but they have 2 convenient westside locations that I've noticed.

One on Lincoln in the Odyssey Video shopping center in the Marina, and another on Abbot Kinney just north of Venice Blvd. I'm sure if there isn't one already, they'll be one in CC soon.

I TRIED to like the stuff but whenever I eat Pinkberry it makes my tongue tingle, like out-of-date-orange juice. Is it freshly spoiled?
My mom's friend had a horrible reaction to it and she can eat ANYTHING. Also, they refuse to post the ingredients. Hmmmmmm.
Once my friend left her cup o'Pinkberry out overnight and the next morning it looked like water.

Hi to all you other Yogurt fans out there. I must confess that I am a yogurt freak myself. I know everyone out there is so in love with Pinkberry but I just DON'T understand why the hell that is.
1. PINKBERRY basically tastes like frozen sugar water. YUCK! It seems like they don't care about taste and all they care about is making a good ol' buck.
I went to this new yogurt shop called Frucci located near MT SAC & CAL POLY POMONA. (Check out their website www.frucciyogurt.com under News for their addresses).
FRUCCI on the other hand really considers taste and ingredients (its rich and you can tell that it has so much less sugar than pinkberry). They really seem to care about people's health and WELL-BEING.
2. FRUCCI is also CHEAPER than pinkberry. Pinkberry even charges a dollar extra for their green tea (what a rip!!) whereas frucci charges all yogurt flavors equally. You guys need to try the Pina Colada (their most popular flavor).
3. Frucci's workers give GREAT SERVICE.
Some of Pinkberry's workers are the worst (very rude and impolite). From my own personal experience i went into the koreatown Pinkberry and asked for three toppings (the blackberry, raspberry, and mochi). I asked, "can i have the mochi?" The female worker harshly and impolitely replied, "It's ricecake." I couldn't really understand at first so I was wondering why she was giving me a horrible face and so I said, "Yea so can i have the mochi please." She then again repeated, "It's ricecake" while rolling her eyes. I was pretty DAMN offended.
My friend also said she went into a Pinkberry and one of the customers politely asked, "can i have some more yogurt please?" The worker sarcastically said, "oh yea you want some more?" She THREW the medium cup of yogurt on the measuring scale (since pinkberry measures by the ounce) and the scale measured 8 ounces. Since medium is 8 ounces, the worker just handed the cup of yogurt to the female customer without saying a word. My friend said that she could see that customer's face turning pink. Pretty sad.
Pinkberry fans you can hate me all you want, but to all you yogurt fans out there I RECOMMEND FRUCCI.

I loved pinkberry, but I totally agree with ya. I like trying diffrent yogurt shops. Where are FRUCCI LOCATIONS???

I saw the big banner on Chino@ 13788 Rosewell Ave. Chino, CA. Is that going to be FRUCCI's new location? Everyone's talking about FRUCCI's different flavor. I can't wait till you guys open one in LA.

cefiore hollywood is giving away free yogurt this weekend!

That first anonymous commentor was right..http://www.nysun.com/article/49253?page_no=3