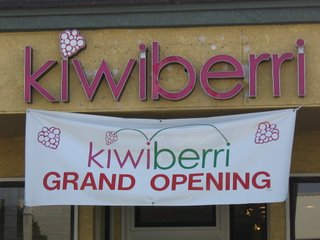 My friend Heather and I checked out the blatent Pinkberry rip-off, Kiwiberri, this afternoon, on 3rd Street, just east of La Cienega. Ever since trying Pinkberry for the first time, I have found myself craving their simple, yogurt-tasting frozen yogurt, but the traffic-filled drive kept me away. The location is a little more convenient for me than Pinkberry, so I thought if their yogurt is good, I could go there instead of dealing with the lack of parking at Pinkberry, and standing in line outside in the blazing sun. Well, Kiwiberri is OK, but no replacement. The first thing I noticed about yogurt was the color and texture. It was more icy than Pinkberry, as if it had more water. It also melted faster. There was also a slight translucency, whereas Pinkberry is opaque - much like non-fat milk compared to whole milk. 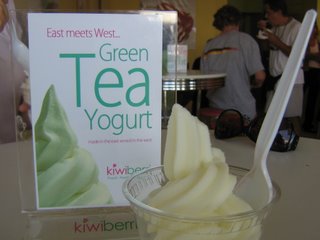 It did taste pretty good, though. It had the tang of yogurt, and was just slightly sweet. I think it may even be less sweet than Pinkberry. They offer just about the same menu: 2 kinds of frozen yogurt - plain and green tea, fruit and cereal toppings (even mochi, which Pinkberry does not offer) smoothies, and crepes with Nutella (no crepes at Pinkberry - they don't need them!). The decor is very similar to Pinkberry as well: candy colored walls, even a sign extolling the health benefits of yogurt. 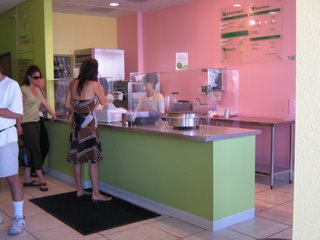 Heather enjoyed her yogurt (even though there was too much Mochi for this Haole) and said if there was one close to her apartment she would happily return. 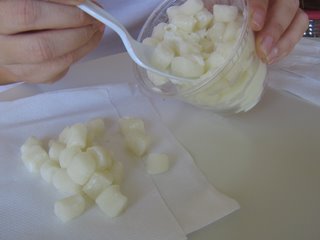 Not quite satisfied after finishing my Kiwiberri yogurt, I drove us up to Pinkberry, where we waited outside in line as a security guard slowly let people in as customers left the store. One small green tea yogurt with Cap'n Crunch later, I finally satisfied my craving. 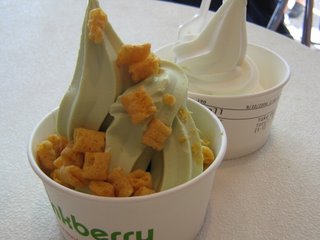 Posted by triplecreme at 3:44 PM

North or South side of the street?

Sonoria - South side, across from Sushi Roku, in a strip mall.

triplecreme, I have feeling that you may addicted to Pinkberry whip cream & sugar.

triplecreme, if you are a chef, it would be so easy to detect high content of sugar and sweetened low-fat whip creme in so called healthy/guilt free PINKBERRY yogurt.

I do not think Pinkberry is guilt free...the sugar is easily detectable...I just like that they serve the first frozen yogurt that actually tastes like yogurt.

pink berry does have mochi! i eat it all the time!! mango, mochi and blueberries..very tasty!

I recently tried Kiwiberri and I do not taste the icy stuff people talk about. In fact, it was refreshing. After going to the gym, I caught myself craving for more. What do they put in there that makes it addicting?

why would the owner of the establishment pursuade me to go to their competitor, this is confusing and if Pinkberry does business in this manner I for one woould never step inside their store.

!!!!!!!!!!!!NEWS FLASH!!!!!!!!!!!!
**********************************
I heard that Pinkberry bribed the franchisee's of the kiwiberri @ 3rd & La Cienega into purposly running the business into the ground then sell the business to Pinkberry for a large amount.. I didnt beleive it so I went by today and it looked a mess and get this the owner even told me quote " Were closed go to Pinkberry down the street it's better" I was shocked , could the rumors be true , I came to enjoy a kiwiberri yogurt because I like the distinct tangy and clean flavor of it , why would the owner of the establishment pursuade me to go to their competitor, this is confusing and if Pinkberry does business in this manner I for one woould never step inside their store.

Sounds like all this drama is being caused by people that are either affiliated with Kiwiberri or Pinkberry...most of the blogs seem to have been posted by prof. blog service. Could it be that "Colleen's Cuisine" is a hired service? sorry Colleen, but you're obviously bias towards one est. I'm sure most of your readers, like myself will certainly question your objective.
As for the taste, I think it's pretty similar.
Pinkberry=more sugar
Kiwiberri=Tangy
At the end of the day it's all about who gets rich, right?

I checked out the Kiwiberri Wikipedia entry (there's a reliable info. source for you, *cough cough*), and it says they were founded in 2003. The Pinkberry site says it was founded in 2005. My question in: If Kiwiberri was really founded 4 years ago, why is the kiwiberri site still "under construction"? I'm not taking sides, because I don't really care either way, but someone is clearly full of it.

The frogurt served at Kiwiberri and Pinkberry is just a lower-grade knockoff of the delicious tangy frozen yogurt that's been served for many years at Bloomingdale's department store. Though they may not have Green Tea frogurt, Bloomie's does have Plain, Chocolate, Peanut Butter, Coffee/Mocha. What they don't have is a trendy decor. BTW, people have been queuing up for Bloomingdale's frogurt for decades.

Hey dudes, it doesn't matter whether Pinkberry, Kiwiberry or Bloomies came first.... all this junk is a knock off from Korean yoghurt shops. The prices are ridiculous at Pinkberry (you are paying for their trendy design) and when I was in LA I nearly spat out the Pinkberry crap; there are dozens, literally dozens, of better stores and better recipes in Seoul than the rubbish they sell for $4 for four ounces (I nearly cried with laughter when my friend in LA said that we should wait in line for it). What a joke! Wake up.... The Italians, of course, have gelato and are laughing at everyone.

pinkberry does have mochi...its just like ordering "animal style" at in-n-out...its behind the counter because they have to keep it cold

I second Seoulman's comment.
If you want some REAL stuff, you really gotta go to Korea. =)
Rumors of Red Mango opening excites me.

I am a person who at first did not understand at all why any sane person could actually become addicted to pinkberry...upon my first try I also wanted to spit out the sour watery yogurt, but soon found myself returning for more with friends every week. Yesterday I happened to be on 3rd and La Cienaga and heard about kiwiberri and considering my friend and I had already had a bad time parallel parking we didn't want to venture out to pinkberry in westwood or elsewhere so we just decided to eat the mystery kiwiberri...and it was AMAZING! I have no clue what you are saying triplecreme, it was smooth and creamy, not icy at all! Kiwiberri's yogurt is infinately better than pinkberry's, although pinkberry might be more generous with toppings. I would definately recommend kiwiberri over pinkberry, and it just so happens (according to a source of mine) that they are opening one very close to the 3rd street promenade in santa monica, right near me!

According to the nutritional information on the Pinkberry website:

The 8-ounce medium size has 10 teaspoons of sugar (40 grams). Toppings can add more sugar and fat.

Pinkberry won’t release the ingredients in their yogurt so we don’t know what it is.

It's CANDY IN A CUP1

Wanna see more pinkberry rip offs? Check out sweetworthy.com they have a huge list of the Froyo shops

did Pinkberri go out of business?

pinkberry has mochi as toppings, you just have to know to ask for it

I noticed your site as I was searching for RipOff Complaints on the web. I found it to be very interesting and inspiring.


We should have more blogs on the net similar to yours
Thanks,