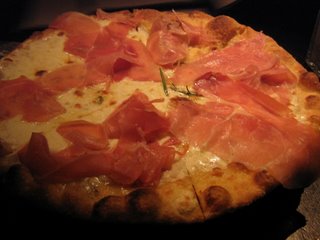 This pub on 3rd near La Cienega is aptly called The 3rd Stop because I would only return if my first and second stops didn't work out. Actually, it is not that bad - just OK. It is the Kiwiberry of pubs, a close, but not quite as good version of Father's Office. They offer about 40 beers, ranging from Pabst Blue Ribbon to the 9% alcohol content Delirium Tremors. They do get points for serving my all-time fave: Pilsner Urquell. They offered about 7 wines as well. Their menu is larger than FO, offering items like pizzas, mac n' cheese, fried calamari, gnocchi, salads and Shepherd's Pie. Though, just like Father's Office, the menu firmly states, "...no substitutions, modifications, or splitting." They do beat FO in the noise department, believe it or not, The 3rd Stop is actually louder.

The highlight of the food was the pizza with mozzarella, prosciutto and rosemary ($9). Thin, crispy crust, with the couple of rosemary needles imparting their glorious flavor over the pizza (photo above).

The macaroni and cheese ($7) was delicious, although a tad heavy on the nutmeg and black pepper. The macaroni was still al dente, not mushy, and the sauce on the thin side, which I prefer. 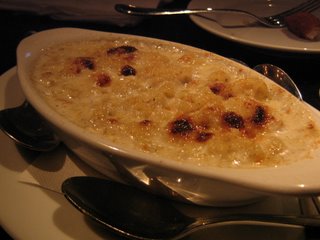 The burger (also aptly named), The 3rd Burger ($9), is an interesting version of a hamburger. It is 6oz. of extra-lean beef thinly coated in sauce, giving it a flavor reminiscent of old fashioned meatloaf. It was tasty, but certainly not the kind of burger one would expect. I think they should make it more of a novelty item, offering small versions like sliders, as well as a regular burger. 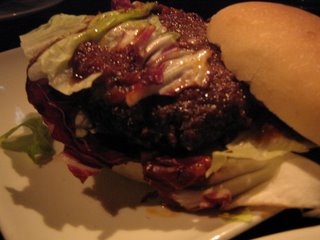 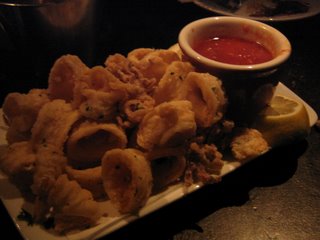 My friend ordered the steak ($9) with "Argentinean garlic sauce" (pureed Chimichurri) and was extremely disappointed. It was small, slighlty overcooked, and a bit dry. 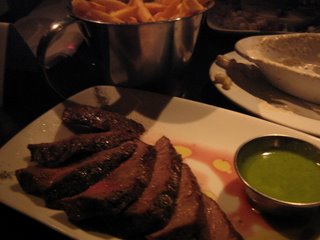 The most surprising dish on the menu was the ham and cheese croquettes, much in the style of those you will find in Spain, just not as good. They were beautifully coated in a thin, dark, crisp crust (and cutting through it is a pleasurable as breaking through the sugar layer on creme brulee - anyone see Amele?), but the filling was too thick and dry - not as creamy as it should have been. 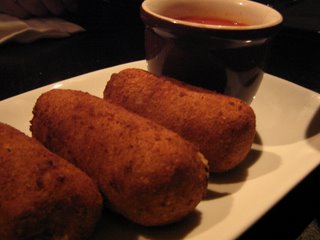 The menu is hit or miss, the atmosphere comfortable and loud, priced not to break the bank, and service swift. Perhaps if I lived nearby, or worked at the hospital across the street I would return for an after work drink and snack - but I don't. So I think I will stick to my 1st and 2nd choices for now. 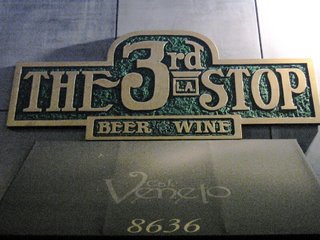 i had a really bad experience at 3rd stop when it first opened. the owner or manager (who was also bar tending) was being such an asshole. he pretty much ignored me for like 10 minutes. i almost threw a glass at his head. but regretfully didn't. i just went for beer but the food doesn't sound promising either.