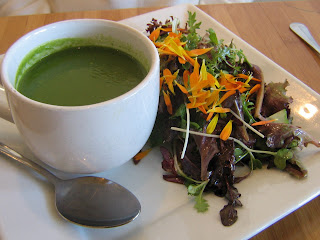 Last week I had the pleasure of dining at Bloom Cafe not once, but twice. Bloom Cafe is a charming cafe on a funky stretch of Pico Blvd near Hauser. One side of the cafe has a take-out counter, where you may get coffee, juices and pastries for breakfast, and the other side is their main dining room. They have a patio seating out back, and sidewalk seating out front as well. We had our lunch inside, which is bright and airy and a little loud with the music and chatter.

Their menu is an interesting blend of traditional dishes with a contemporary spin, including plenty of vegetarian and vegan options, as well as some raw dishes as well. I was ravenous, so I skipped the salads chock full of organic produce, whole grains and sprouted sunflower seeds, and went straight for the hamburger and fries! Made with all natural beef on a whole grain bun, it came with green aioli, which made a great dipping sauce for the fries. 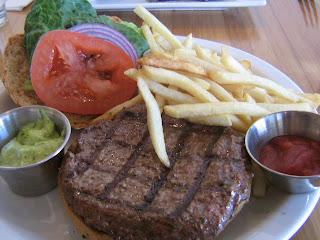 My mom kept it light with a cup of vegan spinach soup and mixed green salad. Both were tasty and satisfying, but both were also undersalted. We washed it down with their tap water, which is infused with cucumber - which must be the new lemon, because they very next restaurant I dined in served cucumber-infused water as well.

Because it sounded exotic, for dessert we tried a raw vegan "cheesecake" made with almond milk. It was pretty, and certainly interesting, but not very sweet and nothing like a proper cheesecake. It was really a frozen almond milk pie, with a layer flavored with blueberries. Luckily, I am not a vegan, so I got to enjoy the chocolate coconut cupcake we ordered as well. 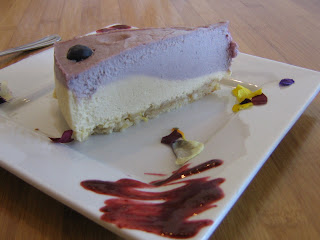 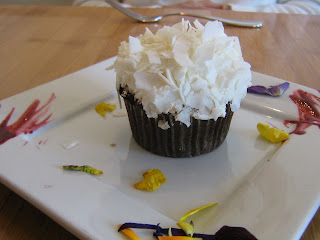 After chatting up our server, we learned that they do not have a beer and wine license, so you may bring in your own wine with no corkage! I quickly made plans to return! The evening was more pleasant than I anticipated. During the day it is loyd, bright and bustling, but at night it is dim, cozy and serene. As well as the salads, sandwiches and regular entrees, after 5:00 PM they serve pizzas. We went for the most unusual: fresh mozzarella, butternut squash, sage and blue cheese. Baked on a nice, thin crust, it didn't last long once it hit the table. For my main course, I had the chicken mac n cheese. It came absolutely piping hot (a clear sign of microwave heating), made with whole wheat pasta and thin strips of chicken, it was rich and comforting, although a bit undersalted like everything else. 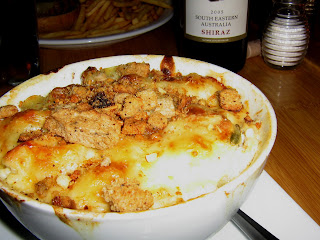 The lemon tart we shared for dessert was quite nice. The trick to making a good lemon tart, is making sure it is not too sweet. This one was sweet enough, and tart enough - just right. What a deal: 2 pizzas, 4 entrees, 1 dessert and no corkage, with tip came to an even $100. I will happily go back for any meal of the day to this quaint neighborhood spot.

Yayy! Welcome to my neighborhood! LOVE this place. We go there all the time, or just order pizza to go. My fave is the spinach salad with huge parmesean cheese shavings, etc.

There's a new place across the street called The Owl...haven't tried it yet.

P.S., no I'm not related to the owners of Bloom Restaurant.

Billy -
That is not the lemon tart, that is the vegan cheesecake. I dig the new blog, by the way.

I also had a great experience there as well. I have had the Fish Sandwich twice. The first time I went there for a business lunch. It was refreshingly light, healthy, and tasty. The second time, they delivered to work -- just as good and I was smart to order the yummy fries. I wish them success!