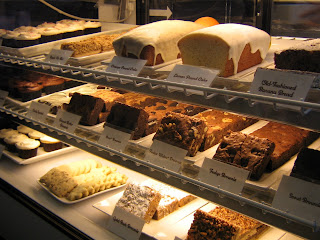 What a promising name for a bakery! As of late, I have been making weekly visits to the valley to see my chiropractor in order to move my head to the side again...so I decided to make the best of it and explore some places in that neck of the woods. Last week I tried Big Sugar Bakeshop in Studio City. After reading a nice article in the latest Food & Wine magazine, I had high hopes. the pastries were beautiful, but, unfortunately, low on flavor. The red velvet is topped with a plain vanilla buttercream, rather the traditional cream cheese frosting, which made a big difference. 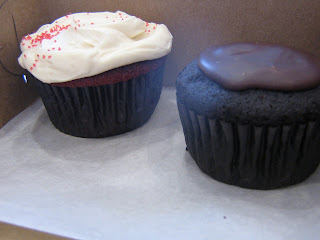 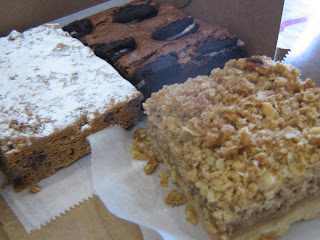 Red Velvet cake doesn't have much flavor anyway, so it really needs the bite from the cream cheese to perk it up. I also tried a cream filled chocolate cupcake, much like a Hostess cupcake. It was good, but they store it in a refrigerated case, so be sure to let it come up to room temperature first (if you can wait that long) since the chill dulls the flavor and ruins the texture. The bars were gorgeous, I just wasn't that thrilled with them. Oh well, I should be thankful that I have not added even more baked goods to fantasize about.

Any other recommendations for cupcakes in the valley? I want to bring some to clients in Burbank this week and would like something special & yummy. I don't want to have to resort to Sprinkles or Dainties if there are other new options to try. Thanks for any suggestions!

Melinda,
go to Leda's Bakeshop on Ventura. Her cupcakes are some of the best.

I was so excited to try this place - it's right by my home. But I too was disappointed.

I disagree! I think Big Sugar is one of the best bakeries anywhere. I've had Leda's and Auntie Em's and they are all way too sweet. I think Big Sugar nails everything. They let the flavor come through without overdoing the sugar.

Have tried Big Sugar many times. There's just not much flavor to any of the cakes/cupcakes. Very timid, bland baking. Strange, because the shop is so "precious" about presentation one expects something more flavourful. I buy here because it's convenient, not because it's particularly good.