The New Berry & The Old Berry

On my way to the new Westwood Pinkberry, I came to a screeching halt when I saw this painted on the window of The Big Chill Frozen Yogurt on Westwood and Olympic: "We got the new berry," and "plain tart." 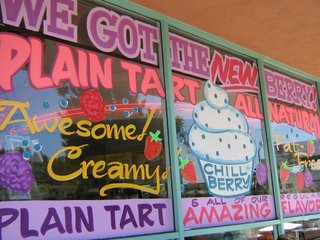 I went in and sampled it. It was not half bad. It was opague and very creamy, even creamier than Pinkberry. It tasted like yogurt. But the aftertaste was a little funny, it was sort of an artificial taste. Not as fresh tasting as Pinkberry, and not as sweet. But I did prefer it over watery, icy, Kiwiberry. 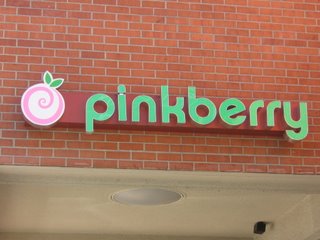 The new Pinkberry is on Lindbrook, just west of Westwood Blvd, next to Subway. When I took this exterior shot, the window cleaner announced to the staff I was taking pictures. When I walked in, the yogurt jerk asked if I was taking pictures of the store, or himself. (Of course) I responded, "you!" 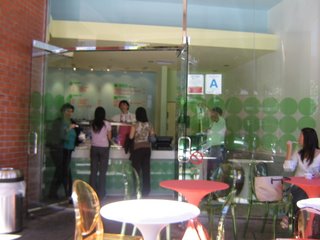 I thought I was in his good graces, so I asked for a plain and green tea swirl, but he said no. Colleen, any tips? I thought I had him in my pocket! It is BS that they will not swirl the two flavors. Why not? It requires no effort on the staff, he machine does it for them. Oh well. I sat down on the cheap plastic furniture out front, and ate my two-headed, all green tea flavored yogurt.
Posted by triplecreme at 1:42 PM

Thanks for the Pinkberry news! I am so excited to have more options. I am perturbed, however, by this photo thing (I noticed the same thing when I took pictures for my blog) and by the refusal to swirl. Not so friendly. But, who knows . . . .it's still not stopping me from craving it in my dreams.

I love your blog, by the way. Fantastic photos, and always sterling reviews.

I am an ice-cream monster, while google search on-line for Westwood Pink Berry location, your blog appears. Great blog and food info.!!

Talk about biting the hand that feeds you. The no photos thing is just dumb. As for the swirl, I think you just gotta get the right person at the right time. Keep asking - I've tried explaining to the owners that people are willing to pay a price premium for the swirl, Pinkberry's own product cost is lower (only half the green tea powder), so they are making a higher product margin, empowering their customer with a secret menu item, and keeping the customer happy and coming back. But hey, what do I know?

actually its not cheap furniture.. they cost up to couple hundred dollars.