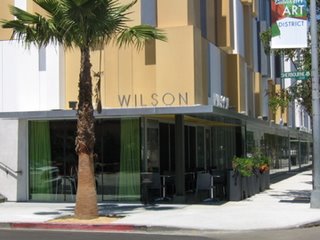 I had a wonderful lunch today at the newly opened Wilson in downtown Culver City. It is located on Washington Blvd., just past the Helms Bakery complex, in the oh-so-cool MODAA building. Chef Michael Wilson is formally of (the now defunct) 5 Dudley of Venice. Wilson is only open for lunch now, and will very shortly open for breakfast and dinner, and will serve beer and wine. The hostess told us a neighbor protested their beer and wine license, causing a delay.

The decor is very sleek and modern, with Eames style chairs, two high-top tables, a bar, a rear patio and seating outside in the front. We sat inside next to the screened-in open sliding glass doors, very much like at The Counter on Ocean Park Blvd., without the garage door openers.

The menu was divided onto four sections, "from the garden," "open-face," "lunch plates," and "piccolo pasta." They offered several specials not listed on the menu, such as roasted Jidori chicken with pancetta polenta, and a soup of melon and prociutto. For an appetizer I had (a rather large serving of) the asparagus and vanilla bean soup ($10, "from the garden") - a combination that piqued my curiosity. Surprisingly, the flecks of vanilla bean floating in the soup livened up the asparagus very nicely. Unfortunately, is was oversalted. 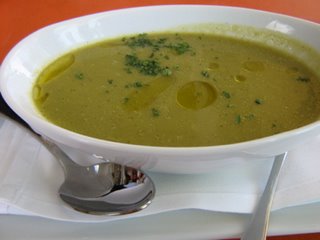 My dining companion, Beth, had the potato and fig tortelli in a bed of Parmesan fondue ($13) that was out of this world. The fig filling was wrapped in a delicate fresh pasta, sitting on a bed of creamy Parmesan sauce, drizzled with brown butter. Heavenly. 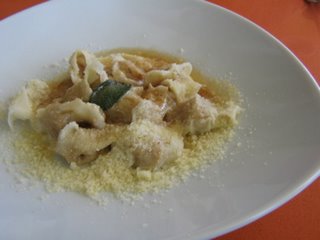 For the main course I had one of the specials, which the server described as a lamb sausage sandwich. Beth asked if it was Merguez sausage, which the waitress had never heard of. It turned out not to be sausage after all, it was really ground lamb kababs, with eggplant on house-made flatbread. It was accompanied by a chive sauce and cucumber yogurt sauce. It was very good, just too much food, especially for lunch. All of their sandwiches are "open faced", which means they are two pieces of bread with filling piled high on them, like the rabbit Sloppy Joe ($18) Beth ordered. It was better than any Sloppy Joe I have had - I only tried it because it did not resemble a cute little rabbit! It had a rich, smoky flavor -I think there were porcini mushrooms in it. Beth thought the serving was too large, and it needed a "reprieve" of salad. 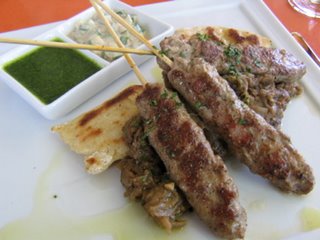 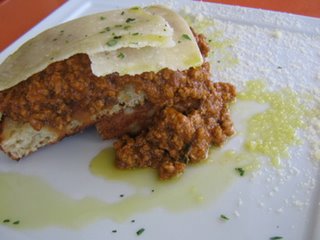 We were full, but wanted to try dessert anyway. They offered three desserts (and not very interesting ones) of chocolate cake, a parfait of ice creams, and a Bananas Foster creme brulee, which we ordered. It passed the test: it had a nice, hard, glassy layer of sugar that cracked when hit with a spoon. Underneath the custard was a layer of banana, and the sugar was dusted with some graham cracker crumbs. It was good, but not as nearly inventive as the rest of the menu.

Service was attentive, but not overly so. Everything ran very smoothly, especially for a brand new restaurant. We must of had our ice teas refilled about four times, whenever it would dip just below the halfway mark.

The bill for 2 iced teas, 2 apps., 2 main, 1 dessert and 1 esspresso totaled $78.46. A little steep, especially when we were given take out containers to fill ourselves. That said, I actually really enjoyed the whole experience. I look forward to returning once they start serving dinner. The menu is familiar, with touches of exotic, and the presentation piled high and beautiful. 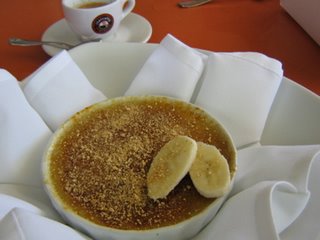 Posted by triplecreme at 6:16 PM

Even when I read your blog with a full stomach, I'm always salivating and hungry by the end :)

wow, thanks for the review. I've been out of town for 5 months and I just drove past there. I'll have to stop in and try it. great blog.

I'm a fan of Wilson's, but it is the rare $25 lunch splurge for me. I've yet to go for dinner, and would love to give it a try sometime.

To your comment of "over-salting", I've found that many of their dishes are just on the side of being a little too salty, but the flavors overall are really quite good.

Of all the places you've been where had the best Hotel furniture?