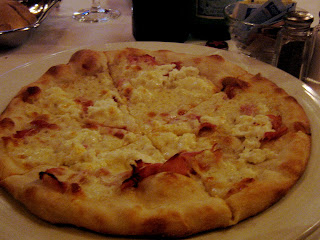 Brunello Trattoria on Washington Blvd near La Cienega just opend last month, and I tried it for the first time last night. It is a comfortable, neighborhood trattoria with pastas, pizzas, panini, salads and secondi. They have several daily specials in each category, and beer and wine. First off they gave us bread, which is thier pizza dough, with a some olive oil. Very nice bread, warmed in the oven with a thin crisp crust and chewy interior. We started off with the pizza daniele: prociutto, mozzarella, ricotta, & parmesan. Very nice with a thin crust - definately the highlight of the meal. Next time, I will get one all to myself. The salads were disappointing. I ordered an out of season panzanella: tomatoes, cucumber, bell pepper and bread. I should have known better than to order tomatoes in the winter. They were flavorless. 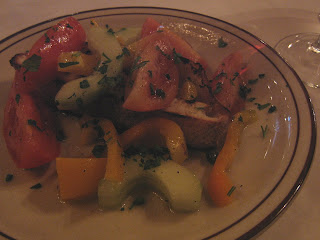 My friends Caesar was overdressed. She blames us, her foodie friends. Had her palate not developed by hanging out with us, she would have enjoyed her salad, she claimed. The mains were better. Two of my friends had one of the pasta specials, linguine with lobster, which they loved. My friend who started with the Caesar had the meat lasagna, and was disappointed yet agian. Our fault again, apparently. My carpaccio was nice. Thinly sliced and pounded meat with arugula, artichokes and parmesan. It was very light and refreshing, with a nice zing from the lemon. 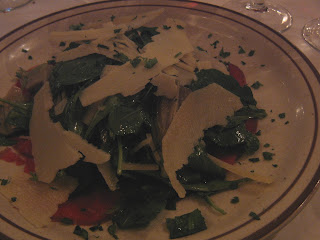 We shared a great bottle of Rosso di Montalcino for $45 which was dry and easy going. They only offer about 5-6 wines by the glass. Most of the wine is in the $40-50 dollar range, but you can find a couple of bottles for under $35. Service was friendly and unobtrusive. The only flaw was we waited a bit too long for the bill, but that is much preferred over being rushed throughout the meal. They let you linger and enjoy the evening. Brunello Trattoria is a great little neighborhood restaurant. Well-priced, great pizza (and they deliver), and good wine. The decor and layout leave a bit to be desired - it looks like it was done on the cheap. My friend was convinced our waiter was also the carpenter. But that's ok. It is part of their charm. 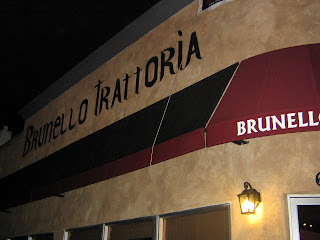 Outstanding. Service very friendly, ambiance clean and very Italian (reminds us very much of being in Italy), food great (started with terrific salads, finished with wonderful veal and chicken dishes). Couldn't do dessert- too full. Will recommend and return.

I am more and more torn between eating out (and encountering those flavorless tomatoes) or buying my own ingredients and knowing what to expect (there is the extra work though...). I went to the Santa Monica farmer's market on Saturday, and they still had beyond delicious tomatoes! If only more restaurants could serve those...

Thanks for all the eating-out advice!

My husband and I just finished having dinner here and it was fantastic. We loved everything we ordered except for the mussels(which they took off from our bill) and the pizza was fantastic. The service was excellent and their prices are very cheap. We will be going back next week.