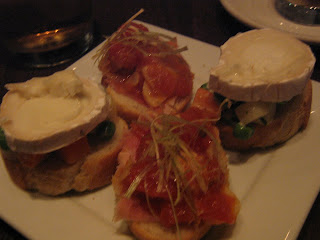 My favorite Spaniard was in town and, among many others, Pintxo was on my list of places to take him. I wanted him to try Spanish food in LA and give me his take on it. We started off with some canapes: Luis ordered his favorite Russian salad (served unlike any Russian salad he has had in Spain, with cheese on it), and I choose the jamon sofrito and fried leeks. These tapas were nice little starters, just enough to fire up the appetite. He liked his, but insisted it was not traditional Russian salad. 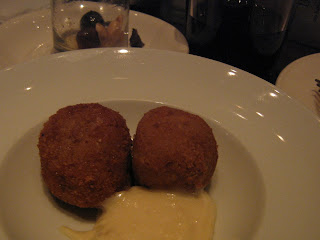 We had to try our two faves. Mine are the croquetas, and his the tortilla. We would order these two at every opportunity we had while in Spain. I really liked the croquetas and alioli. Fried a deep brown, they were creamy and crispy. These were ham and chicken, while in Spain the ones I had were either ham or chicken, not both together. I really liked the combo, although I prefer the traditional oblong shape over the round shape at Pintxo. 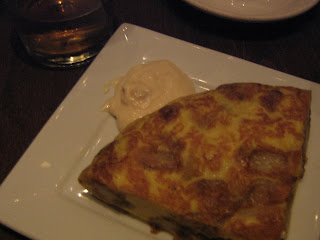 Luis was enjoyed his tortilla, and thought it was as good as any in Spain. It had cubes of potato which he likes, while I prefer slices instead. 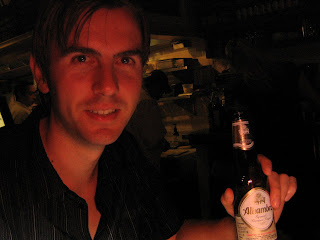 The space is small, the stools uncomfortable, service is fast and friendly. Don't plan on lingering over a long, leisurely meal here. Is really a place for a quick drink and tapa. I really love the all Spanish wine list, with several offerings by the glass, casually served in little glass rather than stemware. Luis enjoyed his Alhambra beer - making his Granadino parents proud.

Personally I just think authentic Russian salad is a hard sell in this country. Not to knock it, but it can seem very retro. In a bad way.

the reviews i read on the internet destroy this place. you didnt see any of the negavtive aspects others were complaining about?