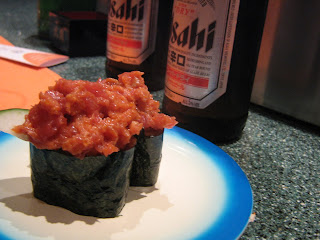 Over lunch one glorious Saturday afternoon in Rome, my friend Charlie (of Rome Review fame) and I were pondering the possibilities of non-Italian dining in Rome, that would make for an interesting podcast. We were thinking of North African, Chinese, Sengalese, but he had a jones for Sushi - so that is what we settled on. We went to a sushi restaurant called Sushisen, in Testaccio. The centerpiece of this sushi restaurant is the large oval bar, with a little conveyor belt filled with small plates of sushi and other Japanese treats. 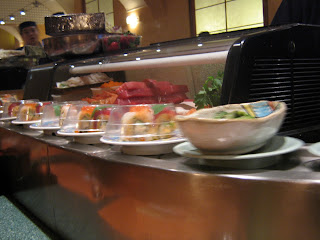 The plates are color coded according to price. I can see how easy it would be to start of with the 3-5 Euro plates, then after a few Sake Bombs, reaching for the 9-10 Euro plates. I was a bit leery about the revolving plates - there was no way of telling how long they and been circulating. But, we quickly learned the advantage of sitting where we did, near the chefs. As soon as the fresh plates were put out, we grabbed them!

Remember folks, like our meal at Gianni's in Rome, we discuss the Shushisen on Charlie's podcast, Rome Review. 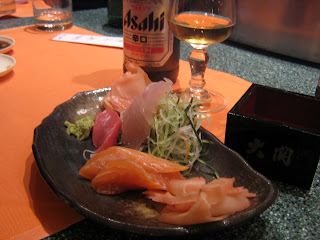 Sushisen is just like all the nice sushi joints here in LA, with just a couple of indicators that you are, in fact, having sushi in Rome. The menu is virtually all photos with very little text. It was funny to see some Italian words on the menu. My favorite was "sake freddo," cold sake. Also, the beer glasses are just like the wine glasses you find in almost every single other restaurant in Rome. And, you can catch the Japanese chefs speaking Italian to the wait staff. Other than those things, you feel like you are enjoying sushi in your own town. 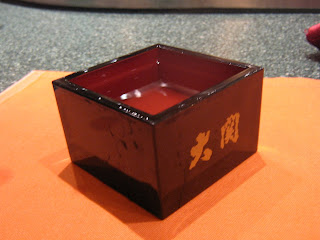 Everything was good. Sake out of a box, no waiting for the food (if you dine from the conveyor belt), and a large menu (with plenty of traditional Japanese cooked fare). 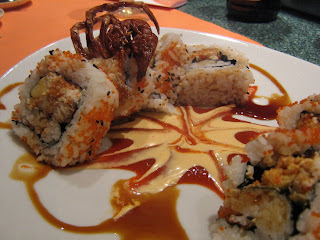 Just one snafu of the night: we thought we were ordering a scallop dish, but what arrived was the Mystery Loaf. After some exploration, we found a bed California rolls under some fish, under a whole bunch of goopy sauce. Not good. 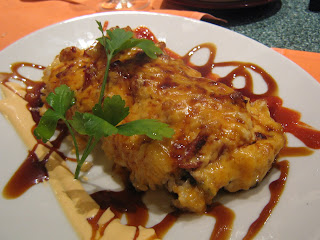 I enjoyed the oysters very much, and the sashimi, but some of the rolled sushi was a bit heavy on the rice. I prefer to fill up on fish rather than rice. Sushi in Rome is not cheap: my share was 50 Euro, more than I have ever paid in LA. I usually have a hard enough time making a $20 all you can eat special worth it. It was a nice reprieve from all the pasta and pizza, sort of a palate cleanser, getting you ready for more Italian food! 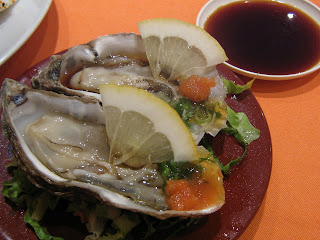 Not sure what scallop dish you ordered... but what you wound up getting reminded me of a BSCR (baked scallop california rolls) which is literally california rolls topped with scallops baked in some goopy cheesy sauce. It's actually a hit-or-miss kind of roll for me.

But glad that great raw fish can be had in Rome, though not having been there as extensively as you have, I'll probably stick to just Italian. :)

Interesting - in all of my eating in Rome fantasies, I never once considered eating anything other than Italian. But, I guess if you spend a certain amount of time there you will need to branch out now and then. I am trying to plan a trip to Europe. Tell me - did the Euro/Dollar issue give you lots of problems, or were you able to scale back for the most part and make it work?

Foodette,
The bottomw line is it will be expensive. I found plenty of restaurants in Rome with reasonably priced food, in Euro. But, affter your hotel, taxis, food, etc, it will just be expensive.