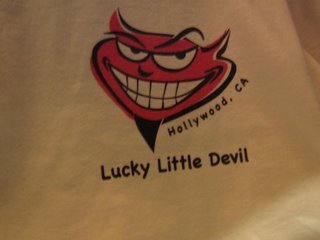 On a rainy Good Friday my friends and I checked out the recently opened Lucky Devil's on Hollywood Blvd. Owned by former Diet Coke model, Lucky Vanous, Lucky Devil's is a chic diner with several micro brews on tap, grilled sandwiches, their signature Kobe burger, and (the now obligatory) cupcakes.

We were the only ones in the place. Maybe it was the rain, maybe the holiday, but at 9:30 on a Friday night I expected more of a crowd. The decor had a sleek mid century modern feel, a nice open kitchen with an immaculate pastry area. A few LCD TV's showing footage of surfing and snowboarding. Our server was attentive and courteous, hovered a bit too much, but we were the only ones there!

I ordered the grilled ham and cheese sandwich, and I was very pleased. Nice and crisp, as were the fries. My friend ordered the $16.95 Kobe beef burger and was underwhelmed. The burger extended far beyond the bun, and was cooked medium, not med-rare as he ordered. There was no char on the patty, as if the grill was not yet hot enough. It was topped with blue cheese and bacon. We can thank Father's Office for this gourmet burger trend - blue cheese and bacon burgers are all over town now. F.O. is still the best.

I wish I was hungry enough to try some of the desserts. The pastry case held beautiful cupcakes! 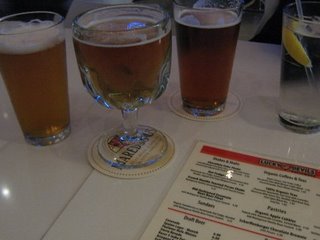 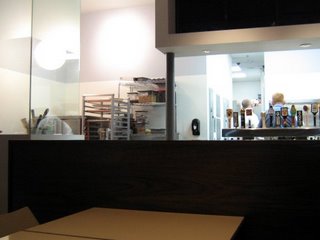 check out the pastry kitchen to the left 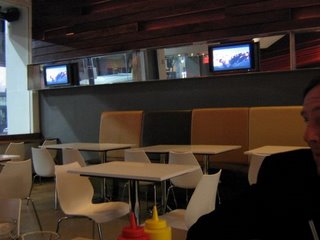 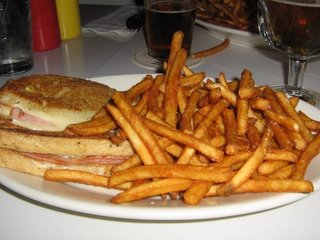 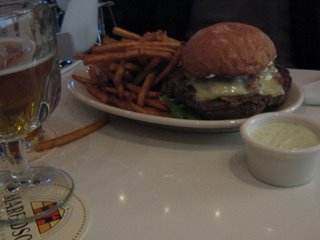 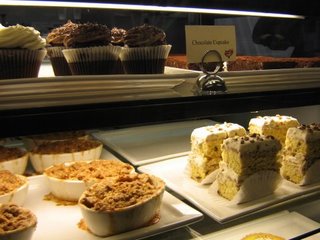 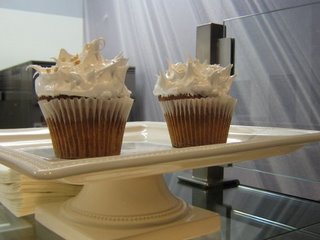 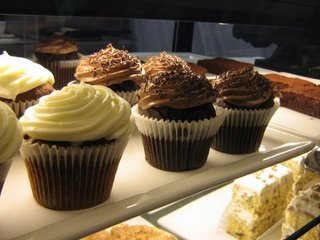 Hey, great description and details. I want to go there even if the burger is not the best!!
Love, Dad

i had the same burger: kobe with bleu and bacon. it was the best burger i've ever had in my life. omfg. i didn't even consider putting condiments on it. same with the fries - best ever. (you can probably tell by the pic - nice and crispy) the roll - everything. (when i had it, the roll was smoother and darker - maybe even fresher - than the one in the pic here) i didn't try the cupcakes, but they look good. they should put a sign in the window that they serve beer! p.s. - the beers are heavy duty - no crappy bud or anything like that. try lucky devil once - if u don't like it, fine. me - i'll be back. maybe today for lunch.

I had the kobe burger without the cheese. It was--ok. But I went to the Highlands Club on Hollywood and Highland for a Holiday Party last year and had some miniature Kobe burgers with a variety of cheeses--and they were AMAZING. That's the reason I tried the one at Lucky Devils. But I was sorely disapointed.

Ok now.... I have just moved to LA from San Francisco. Can I just say how under-whelmed I am with the food in Los Angeles. I feel like you can stumble across any number of amazing restaurants in Sf and only expect to pay $10 for your meal. Not the case for LA. That said... I have recently come across Lucky Devils. I was a little skeptic at first, thinking it was another actor turned restaurateur type place. Not the case what so ever. The quality of food, the service, everything about it reminded me of home! Finally a place I will return to over and over. I came for the all you can drink mimosas at brunch. Had the French toast and spicy sausage. AWESOME is all I can say!!! I came back for lunch and brought a friend back with me. She is a vegetarian so I was a little worried because this place is know for their burgers. To my surprise they had an awesome selection for the veggies. I had the Kobe Bacon Blue. The best damn burger I have ever had!! I'm craving it just thinking about it. With lunch we had a one of the 40 Hand Crafted Beers. Ok what!!! The beer selection was outstanding. Not expected. My friend had a Spiked Mango Lim-aide with a huge strawberry garnish. She sucked that down in about 2 seconds and went for another. After my beer I tried the Devils Mary. PERFECTION. They gave me a side plate with there special in house made hot sauce, in house made pickles, in house blue cheese garlic stuffed olives a lime and celery. I’m telling you this place is awesome. I cant say AWESOME enough. Ill be back at least once a week.

Sarah I don't know you and perhaps you're a super person who really hates the food in LA and wants everyone to know about a great restaurant that you actually love, and if you are, great. I appreciate your enthusiasm, but in reading reviews about Lucky Devils across about 10 different sites I've come across your review - the same exact one, word for word - oh, about six or seven times. As I keep finding it on site after site, it comes across as insincere and makes me doubt the quality of the restaurant. So if you're a real person, you're doing the spot a disservice and if you're someone who works for the restaurant, you're doing your spot a disservice. Just looking for the real, honest, sincere truth not an ad. If the food is as good as you say it is, let it stand on its own.

This place overcooks burgers. I have had the Kobe burger 5 times and NOT ONCE was it cooked correctly. Saturday was my final day ever eating at this place. They don't know the difference between medium rare and well done. It's just sad.

I was there yesterday. I had the lucky burger and my friend had the Kobe blue bacon burger. By far the best burgers we've had in LA! We finished off with the Chocolate Cake shake and again THE BEST!!!