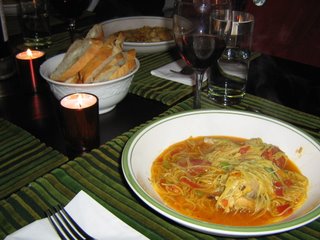 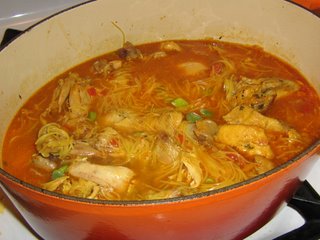 Here is a Spanish dish called Fideo. It is just like paella, made with vermecelli rather then rice. I cooked down some onions, tomatoes, rosemary and saffron until it was jam-like, then browned some chicken I had marinated in saffron and thyme ( from the Lucques cookbook), added some orange bell pepper, chile de arbol, chorizo, and chicken stock, and cooked the chicken until it was falling of the bone. Then I added some toasted broken vermecelli, cooked it until tender, and voila. Fideo. Just like we had in Madrid.
Posted by triplecreme at 10:37 PM